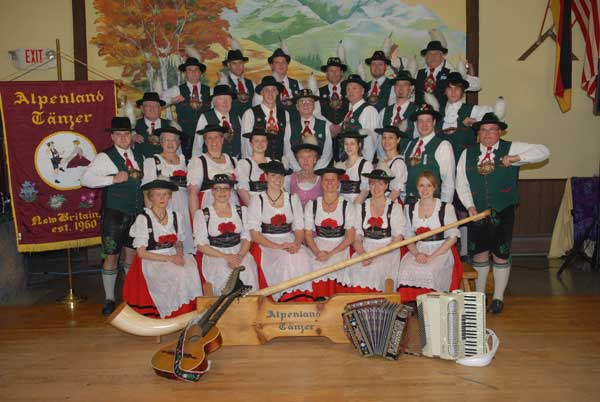 In 2010, the Alpenland Tänzer of New Britain, CT celebrated 50 memorable years of practicing, presenting and promoting authentic Alpine "Schuhplatteln"dancing.  Walter Kober, our founder, started the Alpenland Tänzer in 1960 in order to perpetuate a part of the culture of his homeland.  He wanted to enjoy and share with others the dancing he had performed competitively in his native Austria.  One of those original 1960 charter dancers, Benno Kohlmann, has carried that desire and continues to dance with us still.  From the beginning, our Verein’s (club’s) practices take place at the Austrian-Hungarian Singing Society Donau hall in New Britain.

In the years following Walter Kober’s retirement in 1985, the Alpenland Tänzer has continued to grow and prosper.  We have danced at German, Austrian and other clubs, convalescent homes and senior residences, Oktoberfests, international festivals, church functions, even in front of the Rock Cats’ Stadium, around Connecticut and beyond, in a wide variety of settings.  We wear authentic traditional clothing, called Tracht, from the region around Miesbach in Bavaria, Germany.  We have 8 to 12 dancing couples in our adult group, dancing traditional Schuhplattler and figure dances of the Alpine regions, entertain with sing-alongs to accordion or button-box and guitar music, and play the bells. Our Repertoire consists of authentic Bavarian Schuhplattler and figure dances, as well as other performances.  It is our great joy to share the music and dance of Schuhplatteln with others.

Two significant milestones marked our 30th year in 1990.  First, we were nominated and accepted as members of the Gauverband Nordamerica, Inc., a nationally- and internationally-known organization that promotes the German heritage throughout the United States and Canada.  Second, we established our Kindergruppe which children and junior-adults dance.  The Kindergruppe has blossomed into a group of 10 or more couples, ranging in age from 4-17 years old.  It is a happy satisfaction to see the Kinder grow up, especially in their dancing, to the time of their graduations from high school and college.  The bonds are strong enough that some return to dance with us as adults from time to time.  Our Verein takes pride that, in addition to our couples and siblings, several generations of families are dancing members, even to three generations.

Joining the Gauverband has given us the wonderful opportunity to know dancers in Vereine all across North America, plus many from Vereine in Bavaria, Germany and Austria who carry on the traditions in the region where the dances originated, when we attend the Gaufests.  These biannual festivals, each time hosted in a different city in North America, find us all in Tracht, with much music-making, dancing and singing.  Our Verein first performed an ehrentänz (honor dance) at the Gaufest in 1999 and we danced in competition (Preisplatteln) for the first time in 2009.  In 2005 our 4-bench Bankltanz thrilled the crowd!

In 2006, our Verein hosted the Kinderfest, an annual one-day event, hosted by various Vereine in the Mid-Atlantic and Northeast states.  The youth perform for each other, enjoy cultural crafts in a picnic atmosphere, and make friends whom they anticipate seeing at the next fest, thus continuing the traditions.

A grand celebration was attended by friends, family and other Verein members in 2010 when we observed our 50th Anniversary.

We are grateful for the fine leadership through the years that has brought us to celebrating this, our 50th Jubiläum.  It is also a time when we honor those in our group who have gone before, leaving us such a fine legacy.

We now look forward to a lively future, continue to practice the dancing, promote the customs and culture of the sturdy people of the Alpine lands, and share them with all we meet.

We practice at the Austrian Club Donau, located on Arch Street, New Britain, CT.  If you are interested in having us perform at your event, would like additional information, or perhaps would like to join the group - everyone is welcome to try out - and being able to speak German is nice but not required, please contact either President – Rosemarie Nyborg (860) 329-2894, or Vorplattler – John Aston (860) 302-6277.